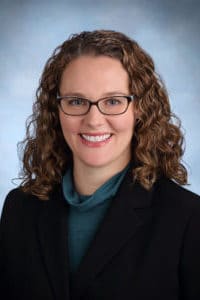 Whitney joined Bowman & Company during 2017. Prior to Bowman, Whitney worked in the Deloitte & Touche Los Angeles office as a manager in their audit practice. After six years of service at Deloitte, Whitney returned to the Central Valley in 2006 and operated her family’s six Hallmark Gold Crown retail stores in the Central Valley and Sacramento regions until selling the business in the fall of 2016. This experience has made Whitney knowledgeable on the various accounting, personnel and operational matters that small to mid-size businesses encounter.

Whitney earned her B.A. in Political Science and Business Economics with an emphasis in Accounting from the University of California, Santa Barbara. She became a licensed CPA in 2004.

Unplugged: Whitney grew up in Oakdale, the “Cowboy Capital of the World”. She and her husband Jon and their three young daughters have called Lodi home for the last ten years. During college, Whitney interned as a journalist for College Media News in Washington, D.C. where she covered assignments at the White House and the 2000 Republican National Convention in Philadelphia.