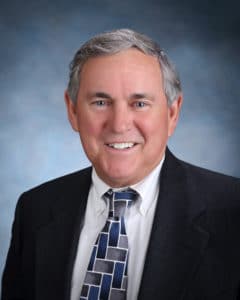 John began his career in June 1970 at a large local firm which merged into a national CPA firm which then became Grant Thornton LLP. While with Grant Thornton, he was the head of the Tax Department and served on the National Board of Taxation. In April 1996, he formed his own company and continued for another 22 years until merging with Bowman & Company on November 1, 2017.

John specializes in tax, estate planning and business succession, and the majority of his clients are family-owned businesses. He graduated from the University of California, Sacramento with a degree in Business, and an emphasis in Accounting.

Unplugged: John loves golf and enjoys fishing with his wife, Bonnie. They have two grown children, a son, and a daughter, as well as three grandchildren. John has been a member of Brookside Country Club for 25 years. He is also the Secretary of the Men’s Golf Club at Brookside. John and Bonnie like traveling and bringing their golf clubs with them. While at home, they have a large yard where John enjoys tending to his vegetable garden.