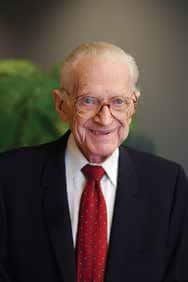 There would be no Bowman & Company if, in 1947, Herb Bowman hadn’t decided to “sit in” on classes that would lead to his becoming a certified public accountant in 1949, the year he founded this firm. There were only five other CPAs in Stockton at the time.

Herb co-founded the firm with his pal Bob Tout, with whom he’d served in ROTC, attended Harvard Business School and enlisted as officers in the U.S. Army during World War II. When concerns arose at the time that tax work might infringe upon the practice of law, he and Bob worked with Humphrey’s College to establish a law school. Herb was in the first graduating class and late in his career was inducted into Humphrey’s Law School Hall of Fame.

Herb Bowman was born and raised in Stockton. He attended Victory Elementary School and Stockton High School. He began college as a Latin major at UC Berkeley then switched to Economics, eventually becoming a CPA. His accounting specialties were estate planning and estate and trust taxation.

His knowledge and spirit helped him to become a trusted business advisor to many of our region’s most notable businesses and families. Over the years, no one arrived at the office earlier in the morning than Herb. As founder he set the tone each day, and leaves a legacy for all to follow. Through his gentleness, patience, and old-fashioned work ethic, he mentored and touched more lives than he ever knew.

Herb scaled back his client work after his 90th birthday, yet was present in the office seven days a week until just a few months prior to his passing in August 2015. The partners, managers and staff of Bowman say that Herb not only gave the firm its reputation for care and professionalism, but also inspired its continued standing within the accounting profession and community. As he aged and retirement was on the horizon, when asked about slowing down Herb said, “I still enjoy meeting with the clients and discussing their personal situations, achievements and problems.”

The firm will forever be reminded of his legacy as an inspirational leader. His pursuit of excellence has driven the core values of the firm since its inception.